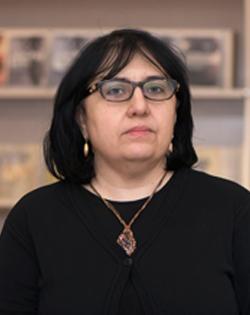 From 2010 till today is acting as researcher of Arts Research Institute at Ilia State University, associated Professor. Heading the Cinema Critics’ Programme, I am teaching The World Cinema and Georgian Cinema History, Cinema Theory and Applied Cinema at Bachelor and Master Levels. I am tutoring and supervising 4 Ph.D. Candidates.

1993-2010 Worked as teacher and researcher at Tbilisi, ShotaRustaveli State Theater and Cinema University

2007-2010 Was chairing the Council of Representatives at Tbilisi, ShotaRustaveli State Theater and Cinema University

2010-2014 Participated in the Selection Committee for the International Film Festival “Prometheus”;

1990-1992 One of the founder of Georgian Newletters “Sarkmeli”, worked at Georgian Cinema Museum;

1. Systematizers at the beginning of the World Cinema;

5. Some aspects of the theory of film editing;

7. Interpretation by Werner Herzog of the play stage “Woyzeck” of Georg Büchner

3. Lecturing on Georgian Cinema in Washington D.C. and Boston, USA;

6. Cinema Department and Cinema Union Conference on “Esthetics and Thematic Tendencies of the Georgian Cinema in last years- 2005-2012”

7. Scientific Conference “Processes developing in Georgian Culture in the 90-ties of the 20th Century”;

One of the authors

2012 12 Best Georgian Movies of All Time, one of the Authors and Editing Committee member (in Georgian/English languages), Intermedia, Tbilisi